Spraypainting, Sea Shanties, Single Launches and Folk Singing…Sessions to Check Out on the Final Day of the Imagine Arts Festival

And so it's here--the last day of what has been a brilliant festival…and there is so much to enjoy before the final act on Sunday night. Start your day with spraypainting then take a tour of Waterford City to see how our ancestors lived. There’s single and book launches…and do not miss award-winning Dublin folk singer John Francis Flynn in St. Patrick’s Gateway. There’s so much to see and do…so get yourself into town!

The last day of the festival starts off on Sunday morning with a workshop—Demystifying Spraypaint—with Caoilfhionn Hanton, a Waterford art student and artist on the rise. Caoilfhionn has nine years of spraypaint and commission experience under her belt (and she’s only 24!), and she is eager to easily translate spray-painting fundamentals, and share her skill set with 10 interested participants.

Participants will walk away with their own piece of artwork and will also practise different types of mixed-media mediums like acrylic paint and markers.

You will learn lesser-known tips and tricks that translate her process and preparation; from designing a piece, increasing scale, how to cut stencils and spraypaint itself and its essential tools.

Spaces are limited and those aged 13-18 are preferable.

Join local historian, Dermot Power on a Walking Tour of Waterford City and hear how our ancestors lived in dire poverty in the “Lanes” of Waterford. Visit some of those lanes and hear how the slums in Waterford were compared to the worst in Dublin.

You’ll also get to visit the locations of Waterford’s many theatres and be surprised at their locations. This is a tour not to be missed.

Dermot Power is a well-known contributor to Waterford Local Radio on all matters history. The author of five books on Waterford history, he has written numerous history articles for journals and newspapers.

He worked for several years in the Local History Department of Waterford City Library.

Bana Rua are a five-piece vocal harmony and folk group from Waterford City. Their style and influences range from Irish folk and traditional to contemporary barbershop and acapella, American old time and country to modern day classics.

Enjoy the sea shanties, sung to accompany rhythmical labour aboard large merchant sailing vessels which had roots in lore and legend.

The Imagine Festival will take the opportunity to raise a toast to our Suir Estuary, all who sailed and sang about her.

Mark Roper was born in Derbyshire, England, in 1951 and has lived in Ireland since 1980.

His collections include The Hen Ark (1990), which won the 1992 Aldeburgh Prize for best first collection; The Home Fire (1998) and Whereabouts (2005). His collection A Gather of Shadow (2012) was joint winner of the Michael Hartnett Award in 2014, and was shortlisted, along with Bindweed (2018), for the Irish Times Poetry Now Award. Even So: New & Selected Poems, was published by Dedalus Press in 2008. He has collaborated on three books with the photographer Paddy Dwan, and wrote the librettos for two operas composed by the late Eric Sweeney.

Join editors from The Waxed Lemon, The Four Faced Liar and Banshee as they discuss the recent upsurge of literary journals in Ireland. The editors will give advice on how to submit your work and audience members will be invited to participate in a Q&A session at the end.

Joanne McCarthy and Derek Flynn are co-founders and co-editors of the The Waxed Lemon, Lucy Holmes and Patrick Holloway are editors of The Four Faced Liar and Jessica Traynor is poetry editor of Banshee.

He has also picked up nominations for two internationally renowned music awards following the release of his acclaimed debut solo album, I Would Not Live Always, last year. He was nominated in the Artist Of The Year category for Folk Alliance’s International Folk Music Awards (IFMAs) 2022. The IFMAs are considered “the premier recognition of folk music industry leaders, legends, unsung heroes, and rising talent.” John also picked up a nomination in the Europe category of the Songlines Music Awards 2022.

As a singer and multi-instrumentalist whose work centres around traditional and folk material, he was a founding member of the band, Skipper’s Alley, with whom he has toured extensively throughout Europe and America. While supporting Lankum on their 2019 UK tour he caught the eye of Geoff Travis and Jeannette Lee who quickly signed John to Rough Trade imprint label, River Lea. And they in turn released his debut album “I Would Not Live Always” in Spring 2021. Get to see him now while we can.

This year’s Imagine Festival sees a joining forces of two of Waterford’s well known electronic music producers for a unique live show and single launch party. Both have found inspiration with the likes of Four Tet, Bonobo and Ross from Friends, combined they have amassed millions of streams and have reached an audience worldwide with their catalogue of releases and remixes.

Evan Miles has been active in the Irish music scene for a number of years, whether that’s co-founding the event and music collective Anomaly, producing his own tracks or working with other acts, he’s become an important force in the south east’s evolving scene, releasing emotive singles on his own and with Rudy, Carrie and rapper Pat Lagoon. Miles has received support from Christian Loffler, Rufus Du Sol, Martin Garrix, Sasha, Matt Ryder and Jacana People.

Having released his second album Inner Creatures in 2020, Peter Vogelaar’s earthy sounding organic electronica has been licensed to HBO, NBC and MTV, including How To Get Away With Murder. He has remixed many artists including Wyvern Lingo and King Kong Company. Inner Creatures was album of the week on Dan Hegarty (2fm) and his remix of SON (Susan O’Neill) was Hot Press’ Track of The Day. Both artists have collaborated on a new single which will be released on this Sunday.

Support a Waterford Festive Fundraiser in Aid of a Very Good Cause! 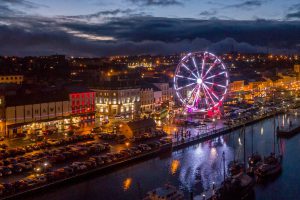