We chat to the self-proclaimed 'too happy' music shop owner, John Palmer in this laid-back interview with the man himself.

It all started back in 1988 when John opened his music shop on the Quay beside Jordan’s Pub. John Palmer’s passion for music has kept many a customer coming through his doors over the past 31 years, each leaving with their chosen instrument, music book or just some damn good advice.

Here, we get to know John a bit better where he talks to us from one of the oldest independent music stores in the country. How bad!

Tell us a bit about why you got into the music business?
I’ve always been involved in music, right back to when I was in college. I was studying electronic engineering and ended up being the entertainment officer there. I started off in the shop on the quay, right next to Jordan’s and then moved up here to Georges street. I’m there ’til I die I reckon! We do all sorts of instruments here, but we do specialise in guitars.

Any memories of when you were younger playing music?
When I was 18 or 19, I went busking with 2 friends for 3 months in Spain and we ended up not coming back till I was 21. We travelled all around Europe. We went to France, Holland, and Germany and as long as we had enough money to put petrol in the car and drink, we just kept going. We ended up spending a year and a half in the kibbutz in Israel. It was all through busking.

Who has been a big inspiration in your life?
Oh. There’s no one person. My mother, she has always pushed me towards the music. She was an opera singer.

Which musician would you most like to see in concert?
I would have loved to have seen Bob Marley back in the day. I’ve seen an awful lot of musicians, a lot here in Waterford. Mike Scott and The Waterboys will always stand out as one of the best gigs I’ve ever been to in Waterford. That was in The Bridge Hotel in ’82 I think it was? Then there was the Fleadh Mor in Tramore, that an amazing weekend of music. I’ve seen The Rolling Stones a couple of times too. To be honest, there’s no one that I’m itchin’ to see at the moment.

Have you been visited by any music celebrities?
Yeah, Shane McGowan would be one of the biggest ones. He was across the street in T&H Doolan’s pub with Spyder Simpson and they came over to have a look at harmonicas in the shop. So we had to shut the shop while he was in because the shop was getting too full. That would have been when The Pogues were at the height of their fame as well. Otherwise, any musician who’d pass the shop, they’d stick their head in.

What was the first guitar you’ve ever bought?
The very first guitar I ever bought, a Yamaha FG-340II. My uncle, who is a great musician advised me if I was buying a guitar, to save as much as I can and put it all into a guitar. So that’s what I did one summer. I think I was about 14 and had saved up working on the amusements in Tramore. It cost IR£110 at the time, which was a good bit back then. It’s had a good bit of work done to it over the years, but I still pick it up every now and then to strum a few chords. It’s quite special and sounds amazing.

We are asking people a little bit about Waterford. Where’s your favourite place in Waterford to spend some time and just relax?
Geoffs was the place to go to for a pint as a student or Downes pub. I do love The Parlour Tea Rooms too. I live in Tramore and love going for a walk out around Garris beach, or any of the beaches along the Copper Coast. Just something special about it.

Which talent would you most like to have?
Oh, I’d actually love to be able to play the piano properly. It was one of my biggest regrets. My mother sent me to lessons when I was 7 or 8. But I soon discovered there was a sweet shop around the corner and as you do I went on the duck from the lessons. I got away with it for about 3 weeks until she found out and that was the end of it. So, unfortunately, my Liberace career was cut short by my sweet consumption.

What advice would you give to young people today?
Never give up. Believe in what you’re doing and always look at the positive. Just keep trying. That’s a tough question, haha! I enjoy chatting about music and love talking to people coming into the shop.

Do you have any favourite singer-songwriters?
I’m always listening to Bob Dylan, a lot of his bootleg stuff. that’s what I’ve been doing the last few Sunday nights, just going on Youtube looking for rare concerts.

What would you say to your 20-year-old self?
Ouh, just do it all again! No regrets, I enjoyed everything I did.

What do you consider your greatest achievement?
Keeping the doors of the shop open. Through all the recessions and all the other ups and downs, I’m very proud of that. Family, four kids all raised.

Best advice you’ve ever been given?
Save what you can and spend as much as you can. 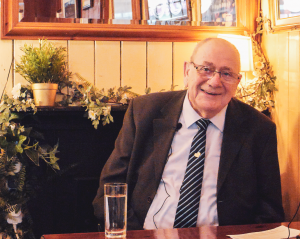 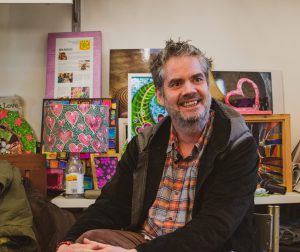 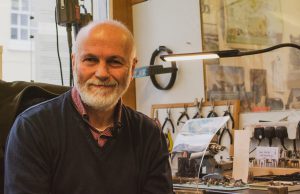 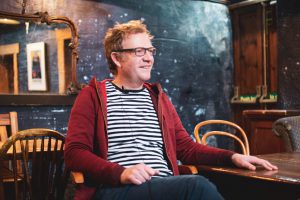